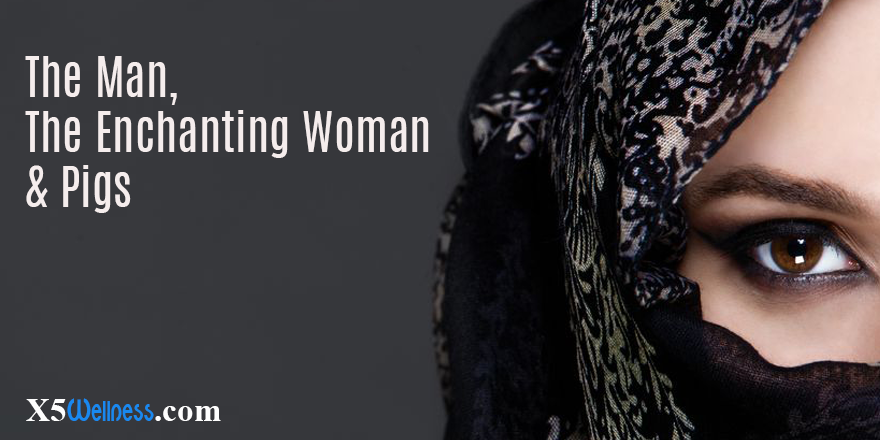 Lovers and haters are equally captivated by the object of their love or hate. Captivity may not be as important as where it leads.

A man had reached a level in his spiritual evolution that he could commune with God directly. This blessing created the illusion that he had reached mastership.

Soon, he gathered devoted followers of his own. His disciples loved him and followed him everywhere.

The man, infatuated by his ability and the power of the personal experience of God, never thought to ask simple questions from the Almighty; the gentle companion of his heart.

Fortunate for him, God has his plans and follows through with them without our permission, feedback and even knowledge.

In this case, the man lacked the wisdom of the heart.

One day, as he walked around with his adoring disciples, they came to a pig farm. This man had come from a tradition that looked down on women. He also considered pigs to be disgusting, and those who cared for them unclean, belonging to lower levels of spirituality.

He looked away from the pigs toward a cottage on the opposite side of the farm.

The cottage door opened and an enchanting young woman stepped out. The intense flames of unbalanced romantic love burst into full power in the man’s heart.

Abandoning his disciples, ignoring their pleas, he went to the woman.

Without hesitation, he professed his love for her.

The woman noted his cleric attire. Amused, she asked, “What would you, a spiritual master, want with me. A silly woman who cares for unclean pigs?”

The man stammered, falling to his knees apologizing.

The woman was unrelenting in her scolding.

The man knew that she had had enough of the harsh attitudes toward her and the way that she made her living.

He did a quick calculation in his mind.  Maybe he could win her affection by letting her get all the years of frustration and anger out.

He was bargaining in his head to manage his heart, the heart that should beat free from all bargains.

Kneeling in the dirt, head bowed in worship of his new idol, his heart’s desire, the man listened.

His plan seemed to work.

Finally, the woman said, “If you love me, care for these pigs as you would my children.”

So, the man did that with all his heart.

Years went by as the woman teased and tormented him and at the same time asking him to give even more love to the pigs.

Gradually, slowly, the man’s arrogance diminished. The light of unconditional love began to chase the shadows of romantic love away. The shadows that also separated him from the woman and pigs.

He began to see the unconditional love connecting all events and creatures. He began to fall in love with Life. He gave up bargaining. He cared for the pigs because he loved them.

God spoke to him.

He had forgotten the Voice.

He had never noticed the sweet Love intermixed with the awesome strength of that Voice before.

God whispered, “Now you are ready to see me as I am and not as you thought me to be. It is time to begin your education.”

The Light pouring out of the man’s heart touched his weathered face; a smile cracked on his severe face.

He turned to watch the enchanting young woman, the farm, and pigs sparkle and turn into pure white light.

What was left was pure unconditional love permeating from all around him reflecting what was in his heart.

The man now knew the One behind the many.

Writings of Jalāl ad-Dīn Muhammad Rūmī as well as Paramahansa Yogananda inspired this story. Sri Harold Klemp’s teaching gave me the ability to write it.

Imagination “I saw the angel in the marble and carved until I set him free.” ― Michelangelo